When the lamp tells you that it has a weak signal, then know that something is happening. Some time ago I decided to buy a WiFi amplifier. As I also like to test devices, I focused on the Xiaomi WiFi amplifier with the note Pro. In this review I will describe my experience of working with this device.
Mi WiFi Extender Pro is another Xiaomi WiFi amplifier after the fairly well-rated Mi WiFi Extender 2. The task of this device is to strengthen the WiFi signal if the router we have does not cover, for example, the entire apartment. I had problems with coverage in the bedroom. Some devices called for better coverage, so something had to be done.

The amplifier looks professional. Xiaomi has departed from the idea of ​​\ uXNUMXb \ uXNUMXbthe amplifier as a USB "stick". Now we have a device that we plug directly into Sockets. Of course, we need an adapter for this, because plug is chinese. 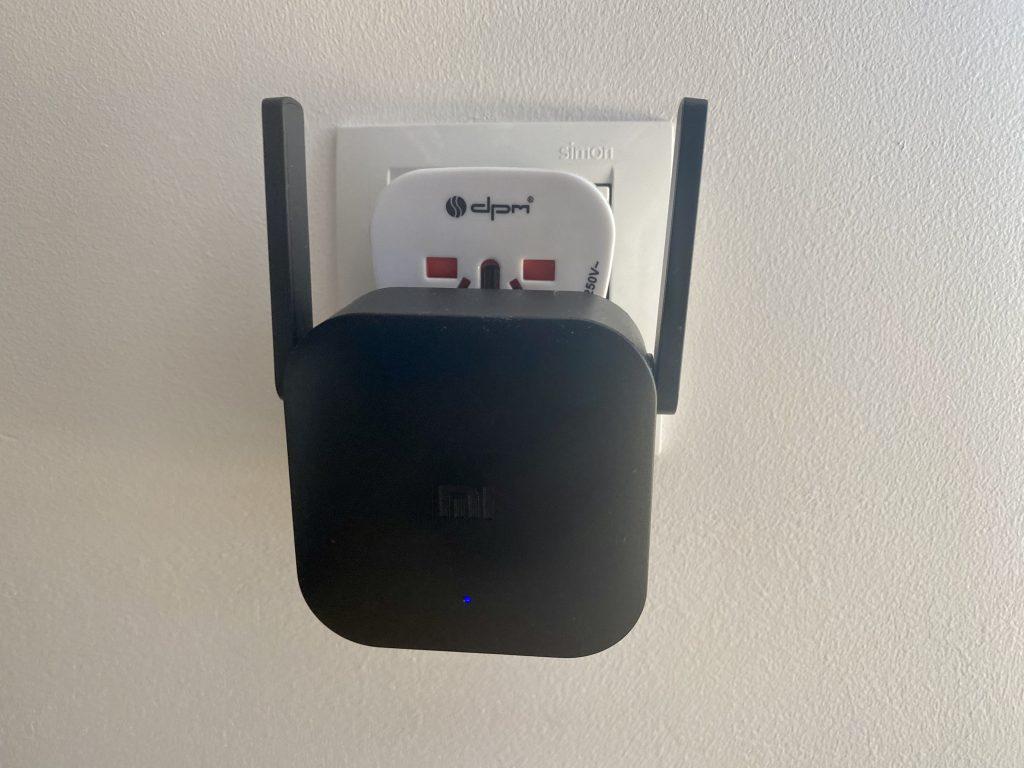 Amplifier WiFi Xiaomi is made of good quality plastic and has a black color. On both sides of the device you will find built-in antennas that can be freely positioned. There is a light on the front informing us about the status of the device. The Xiaomi reset hole has been hidden at the bottom of the device. They could have thought it better though, because it's hard to get to.

It is worth paying attention to the fact that despite the note "Pro", the amplifier supports only network 2,4 Ghz. If you want to extend the range of the 5 GHz network, I have bad news for you. Accordingly, the Xiaomi WiFi Amplifier does not support the speed of 300 Mbps. With its capabilities, you'll achieve speeds of around 20-30 Mbps.

As it happens with Xiaomi products, evaporation luckily it is quite simple. We search for a device from the list and add it to our home. After plugging it into the socket, the screen shows whether the amplifier has a good or weak signal. Based on this, you can determine if the place where you have placed it is appropriate.

Besides, we can turn on the WiFi roaming option. Thanks to it, the amplifier advertises itself under the same name as router. Thanks to this, when walking around the house or apartment, we will automatically switch between one and the other device. Comfortable.

In the application, we can still check the list of devices connected to the amplifier along with their IP addresses.

An amplifier every day

Did the amplifier solve my problems? Yes. I have a lot of devices at home Smart Homeso WiFi coverage is important to me. After mounting the amplifier, I noticed a real increase in range. Philips lamp she stopped demanding better coverage. From 24% signal strength jumped to 86%.

Finally, I can finally work in the bedroom. Until now, this was a problem, especially with video conferencing. Now I do not have this problem, because the device provides me with stable internet at around 20 mbps. Earlier it was about 10 mbps and sometimes the video conference was interrupted.

You can attach up to 64 devices to this amplifier, although Xiaomi recommends a maximum of 24 (in total, it is not known why they mention these 64 ...). I have 3 to 5 of them there, so I definitely catch myself in this range.

The first Xiaomi mopping robot - Is it worth buying?

I waited a long time for him, but he finally came to my door. Full of hope and expectations, I greeted him. Xiaomi mopping robot - created by SWDK. Now I can share with you my thoughts on his ...

END_OF_DOCUMENT_TOKEN_TO_BE_REPLACED

What is the difference between the Pro amplifier and the second version? Virtually both range and signal strength are identical. Even despite the use of super antennas. The amplifier of the second version can connect up to 16 devices to each other, and the Pro 64 allegedly. In addition, the Pro updates itself.

Is it worth buying this amplifier? I think so, but from the Pro version I would really expect 5 GHz ... The Pro amplifier is very similar in terms of performance to version 2 which is cheaper. So if you don't want to overpay, get version 2. However, if you have a lot of devices or you just like the Pro design, get this model. Both will meet the requirements.

The pitfalls of building a smart home, or the suffering of a young smarthome (act 9)

You are inspired somewhere and want to run some smart solution at home. So you scour the Internet and you come across something interesting. You read the description, the device itself, and even its reviews and ...

END_OF_DOCUMENT_TOKEN_TO_BE_REPLACED

Advanced Flow for Homey Pro is a reality

Homey showed off Advanced Flow, a new feature, available as a one-time purchase for Homey Pro and Homey (2016 - 2019). Advanced Flow is a step forward in the way users automate their smart home. Thanks to Flow cards that automated ...

END_OF_DOCUMENT_TOKEN_TO_BE_REPLACED

Roborock Q7 Max + - Reasonable evolution in the world of cleaning

Roborock came back to my doorstep. You could read my Roborock S7 review recently, and today I have another test for you. This time it's time for the cheaper brother, the Roborock Q7 Max +. The plus in the name corresponds to ...

END_OF_DOCUMENT_TOKEN_TO_BE_REPLACED

Chinese Xiaomi is launching a new version of its iconic TV adapter called Mi Box 4S Max. The device has not been significantly redesigned, but offers an improved technical specification. The equipment has just debuted on the Chinese market ...

END_OF_DOCUMENT_TOKEN_TO_BE_REPLACED

SwitchBot Lock - turn a traditional lock into a smart solution

SwitchBot Lock is a new smart device that can turn a traditional door lock into a smart solution in just a few moments. The equipment will be officially sold in a few days. A new accessory called ...

END_OF_DOCUMENT_TOKEN_TO_BE_REPLACED

Redmi Note 10 and 11 in the Promotion only until Thursday!

From 10 to 16 June, Xiaomi smartphones from the Redmi Note 11 and Redmi Note 10 series in selected colors will be available at reduced prices. The colorful promotion includes a total of five different models from the series ...

END_OF_DOCUMENT_TOKEN_TO_BE_REPLACED

Samsung Family Hub refrigerators with support for the TV Plus service

Samsung has just announced the upcoming update of Family Hub refrigerators. One of the most interesting new products is the support for Samsung TV Plus, i.e. a service broadcasting live TV. Information on this matter was disclosed during ...

END_OF_DOCUMENT_TOKEN_TO_BE_REPLACED

Xiaomi and Leica Camera, whose legendary reputation is based on the combination of a long tradition of top-quality products, innovative technology and German craftsmanship, officially announce their strategic cooperation in the field of mobile photography. Xiaomi's first flagship smartphone, ...

END_OF_DOCUMENT_TOKEN_TO_BE_REPLACED

The pitfalls of building a smart home, or the suffering of a young smarthome (act 8)

Due to the nomadic lifestyle, I changed my place of residence relatively often. This was mainly due to the change of job. Unfortunately, such a lifestyle is not compatible with the effective building of a smart home. You have to create a system everywhere from ...

END_OF_DOCUMENT_TOKEN_TO_BE_REPLACED

FIBARO i Nice educates in the Smart Home area

In recent years, building automation systems are very popular not only among installers, electrical engineers and other industry specialists, but also students of vocational schools, technicians and students of technical faculties. Young people see ...

END_OF_DOCUMENT_TOKEN_TO_BE_REPLACED

We have signals that Xiaomi Smart Band 7 is coming soon in Poland!

The premiere of the Xiaomi Smart Band 7 smartband is behind us. In China, the new band has already had its premiere, now it's time to answer the question that interests us much more. When can we expect a new band ...

END_OF_DOCUMENT_TOKEN_TO_BE_REPLACED

Xiaomi Mi Band 7 presented! We have photos and specification!

The most popular smart band in the world has its new generation. Xiaomi Mi Band 7 comes to us again as an evolution, not a revolution. Will it conquer the market like its predecessors, I dare to doubt, but we still have ...

END_OF_DOCUMENT_TOKEN_TO_BE_REPLACED

Zulu
Scroll to the top

You are only one click away from entering the world SMART

Subscribe to the newsletter and explore modern technologies and devices every day to make your life easier!

Important: we use cookies We use information saved using cookies and similar technologies, including for advertising and statistical purposes and to adapt our services to the individual needs of users. Advertisers, research companies and multimedia application providers can also use them. In the program used to operate the Internet you can change the settings for cookies. Using our websites without changing the settings for cookies means that they will be saved in the device's memory.
Accept